Oh my goodness, we have some fantastic writers here in Y5.

This week we have been constructing short narratives using 'show don't tell' to improve our writing when in character.  I am so pleased with all of the children and their work but I am delighted to be able to share some work from our current STAR WRITERS - Thiruthiga and Teni. We began with a modelled sentence before the children were encouraged to continue the narrative in character. Well done both of you, your work was full of emotion and a delight to read. I was left wishing there was more to come!

Well done Y5, you have really settled in well to your new class, routines and curriculum and I am super proud of how hard you have been working

It's been a busy term so far and we have so much to look forward to in the coming weeks - a school trip, a residential, a class assembly, then (whisper it) Christmas..

Here is a snapshot of some of our learning so far this term, we hope you enjoy looking at our pictures.

Cor! Look at that! Is it real? We've seen a picture of that in class!

It was my absolute privilege to take Year 5 to visit the British Museum this week. The trip was organised so that the children could explore some of the artefacts from the Sutton Hoo burial site, as well as other Anglo Saxon items, to link with our History topic - Saxon Settlers.  If the train and tube journey weren't exciting enough, stepping inside the British Museum was a huge wow moment for some of us.

We were able to have close up look at artefacts we have been studying this term, followed by a sneaky visit to see the Ancient Egyptian mummies (our History topic from Autumn) just before we left!

Before I let the children tell you more, I'd just like to thank the following adults for giving up their time to come with us: Mrs Hurst, Mrs Tunstall, Mrs Bater, Mr Bowers & Mr Sukonik - who knew a day off could be so much fun?

Thank you all again. The children's enthusiasm and excellent behaviour meant that they were fantastic ambassadors for our school and I am very proud of them. Some of our children would like to tell you about the trip in their own words:

"We went to the British Museum on Monday and went to see things from Sutton Hoo, the golden buckle, cloths, iron and pottery. (and Egypt, when we saw dead bodies and inside the tomb and what happens when you die as a special person in Egypt.) I especially liked when I saw the golden buckle in real life, I enjoyed everything else but my favourite was the golden buckle."

"On Monday 20th I went to the British Museum with my class. I went there because of my history topic, Anglo Saxons. I was excited to see the Sutton Hoo helmet! I saw real gold! It was so exciting. I got to draw the different materials. I really enjoyed my day out and I wish I could go again."

"On Monday 20th May, me and my class went to the British Museum on a school trip. I loved it, it was excellent. First we were in groups of six, then we walked to Crayford train station. We got on the train and was on there for one hour and then we got on the underground for a minute or two. We waled to the museum put our bags in lockers and went to the 'Sutton Hoo' section. We started to look around and see the amazing artefacts. After lunch we got to look at some Roman artefacts and mummified Egyptians. Soon we had to leave but when we left I was thinking about the day and I loved it."

"On the 20th of May, Y5 went to the British Museum on a school trip. It was great. First we walked to the train station and waited for the train, my partner was Temi, in my group was Temi, Franky, Noah, Jessica T and Millie. My group leader was Mr Sukonik. We arrived at Charing Cross and got off to get the tube, it was so loud! Then we got to the Museum and went to the Sutton Hoo exhibit. It was amazing! We saw the Franks Casket and loads of jewellery. We had to fill in some worksheets with our groups, it was so much fun. After lunch we went and looked at the Egyptian exhibit - it was so cool, we saw real bodies. Then we walked to to get back on the tube for the train station. On the train my group made up funny names, we were a bit loud, I don't know how Mr Sukonik put up with us! I would like to say a big thank you to all the adults. THANK YOU!!!"

Welcome to Y5! The children have had a really positive start to the new school year and have embraced their learning enthusiastically. Please take your time to have a look around at some of the activities and learning we have been getting up to so far this term.

This term we have been learning all about the ancient Egyptians. During one of our lessons we explored why and how the great Pharaohs were mummified. We then took this to a more practical level but I will let Marie-Ange, Ava and Rehoboth explain more..

WHY WE MUMMIFIED AN ORANGE!!!

I believe, Mrs Hurst would have been a better way to mummify something because it would have given us a better experience of how the Ancient Egyptians would have felt during the process, as Mrs Hurst is an actual human and we could pretend to cut through her and mush up her brain with a hook.

How to mummify an orange.

Firstly, we had to make a slit in our orange from top to bottom.

Then, once we had taken out all the oranges’ insides, we had to put kitchen roll to suck up any excess juice. We had to keep putting in clean kitchen roll until the inside of our orange was dry.

After, we had to sprinkle a spoonful of cinnamon.

Mrs Sukonik mixed together salt and soda crystals to substitute as natron, we also used this so that all the moisture inside the orange dries up.

The natron should fill the orange until it has reached the top.

Next, we had to wrap our mummy (also known as an orange). We had to make sure our slit was pushed tightly because we didn’t want all of our ingredients spilling everywhere. We had to get our linen bandages and then wrap the bandages around the orange.

After we wrapped our orange we got a safety pin to make sure nothing falls out. After 40 – 70 days we will check on it to see if it has shrunk or got darker.

By Ava O'Neill and Rehoboth Oso 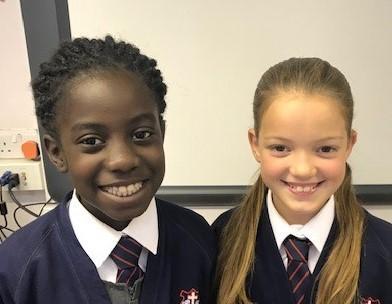 As you can see, the children had a lot of fun 'mummifying' oranges and Mrs Hurst was very grateful that she was spared! We will check back in on them at the end of term and keep you updated as to their progress.

In science we have been working practically and learning all about Materials and their properties.

So far this term we have worked together to group materials, explored thermal conductors and insulators, discovered how to separate materials which have been mixed and learnt which materials are soluble and which are not, still to come will be learning about irreversible changes!

In English we have been reading Wonder by RJ Palacio and this has led the children to some wonderful role play and dilemma solving activities.

Here are a selection of freeze frames from one of their lessons, written and acted by the children, concerning strategies for dealing with bullies. The children used freeze framing to allow discussion from the rest of the class as to how they thought the scene would end and what the person being bullied should do, each group then continued their scene to show how they decided the problem should be resolved. I am very pleased to say that all of the groups found a sensible, practical solution ( such as walking away, telling an adult or standing up for themselves - in a non violent way!) and worked well together to get across their key messages and the emotions their characters would have felt, well done everyone!

Watch out, there's a meanie about!

In our DT lesson, some of us used a computer program to design key tags and name plates. There were lots of steps involved. We are really looking forward to seeing our end products next week!

We made some delicious jam tarts.

We have had a great time during our first two sessions at BETHS!

We cooked some Dutch Apple Cake. Hope you enjoy it when we bring it home!

In Science, we disected a flower and examined it under the microscope.

We have been learning all about North America and have researched all of the 23 countries that make up this continent.

We located all of the countries on a map.
We learned all about the lines of latitude and longitude: The Equator, The Tropics of Cancer and Capricorn and also how time around the world is measured from The Greenwich Meridian.
We used information texts to find out about the different climates that are found in different parts of this continent.
The Niagara Falls and The Grand Canyon are natural wonders and can be found in North America.
We created posters to remind us of the hygiene rules we need when cooking and then used the internet to find out about the sort of food that is eaten in North America.
Autumn Term

The children were all keen to participate in our Egyptian theme day to bring our first topic of the year to a close.

How fantastic did all of the children look in their Egyptian costumes?

We worked hard to read and write like Egyptians using Hieroglyphs and also used the Egyptian number system to add and subtract.
Some photos of our class dressed as Egyptians.
Some of the girls made up a dance which they taught to the rest of the class in the afternoon.
We worked in class to design our own mummy masks. We also made nets and built square-based pyramids. Here is a collection of our work.